Compounding – The Eighth Wonder of The World

Legend has it that long ago in India, there lived a Raja who believed that he was wise and fair. He wasn’t. Every year he kept nearly all of the people’s rice for himself. Then when famine came, the Raja refused to share the rice, and his people went hungry.

A villager within the Raja’s court devised a clever plan. He did a good deed for the Raja, and in return the Raja let him choose his reward. The villager asked for just one grain of rice, doubled every day for thirty days.

Because of the surprising power of doubling (compounded growth), one grain of rice grows into more than one billion grains of rice after thirty days. The villager taught the Raja a lesson about what it truly means to be wise – and fair. 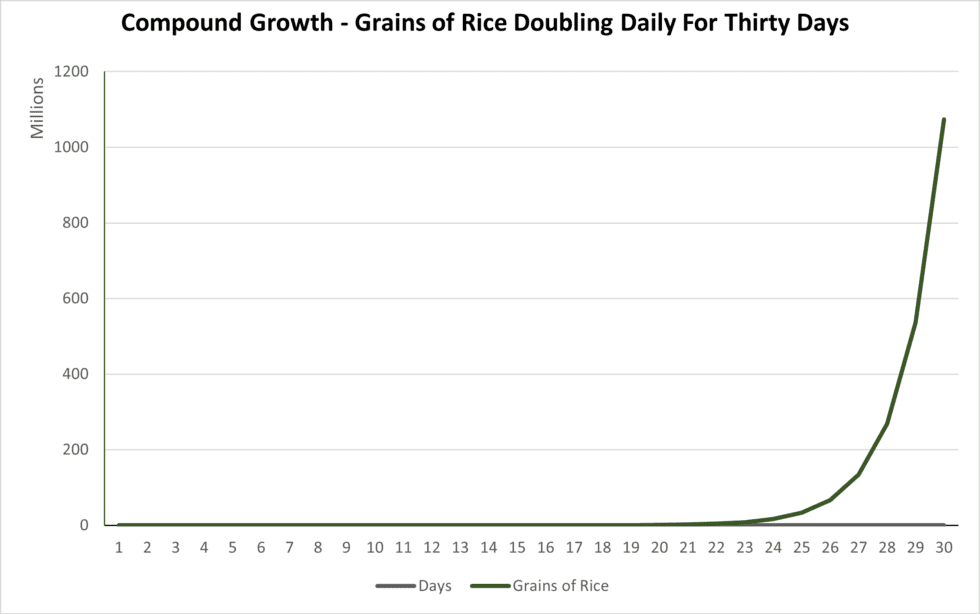 Compound growth (growth on growth) is often not intuitively apparent to us, yet it is without question is one of the most powerful forces in nature. When it comes to building wealth, it is second to none.

Warren Buffett is one of the richest people in the world. He is worth an estimated $100 billion dollars. He’s also 90 years old. He has been at the investing game for a very long time.

It is stunning to realize that upwards of 97% of his wealth came after his 65th birthday.

The rice chart explains why – compounding.

“…the best returns you can earn for the longest period of time are rarely the highest returns in any given year, or even decade. An investor’s goal shouldn’t be the best annual returns. It should be to maximize wealth. Good investing isn’t necessarily about earning the highest returns. It’s about earning good returns you can stick with for a long period of time. That’s when compounding runs wild.

Understanding the inherent power of compounding is how great wealth is created. It is the most valuable financial lesson that can be learned.

“The first rule of compounding: Never interrupt it unnecessarily.”